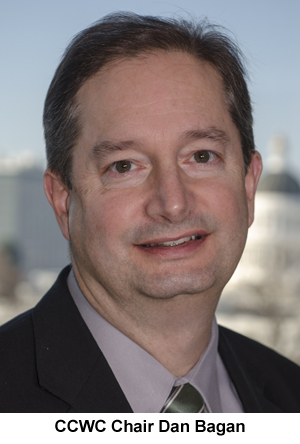 The California Coalition on Workers’ Compensation (CCWC) Board of Directors got a head start on the new year by installing a new chair and officers for the 2017-18 term during its December, 2016 meeting.

Among the appointments was that of Dan Bagan as Chair. Bagan, West Region Risk Manager for UPS, had previously served two years as Vice-Chair. He succeeds Kevin Confetti, Director of Workers' Compensation and Employment Practices for the University of California. Confetti will remain on the board for the two-year term in the position of Immediate Past Chair.

In his role at UPS, Bagan is responsible for managing the casualty claims in 15 western states including California where he has worked over the last 13 years.  Prior to his current position, he was a financial controller for UPS in Oklahoma, Washington and Northern California.  Dan started his career with UPS in 1983 as a package car driver in Denver, Colorado.

The December board meeting also saw the appointment of Kurt Lesiure, Vice President of Risk Services/Asset Protection for the Cheesecake Factory, Inc., as Vice Chair. Leisure was also re-appointed to the position of Conference Committee Chair.

Three other board members were also re-appointed to positions they held during the 2015-16 term. Antoinette Smith, Assistant Vice President at Metro Risk Management, was re-appointed as Secretary; Matthew O’Shea, Hearing Representative with Safeway, Inc., was re-appointed as Treasurer; and John Riggs, Worker’s Compensation Manager for the Disneyland Resort, was re-appointed as Membership Committee Chair. O’Shea was also subsequently elected Chair of the Government Relations Committee.

All appointees serve a two-year term that commenced January 1, 2017.