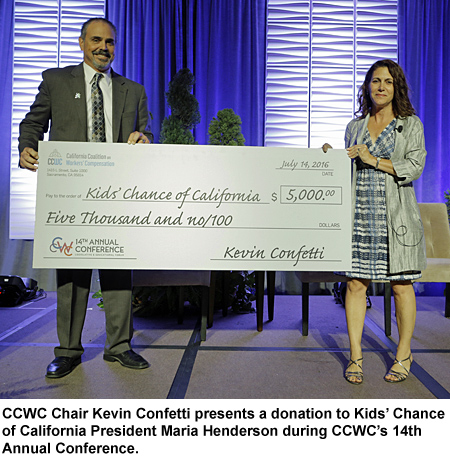 For the fourth consecutive year, the California Coalition on Workers’ Compensation has expressed its support for Kids’ Chance California through a $5,000 donation. The most recent donation was presented to Kids’ Chance President Maria Henderson during CCWC’s 14th Annual Conference in Anaheim.

Kids’ Chance of California is a non-profit organization whose mission is to provide need-based scholarships to the children of California workers who have been fatally or seriously injured on the job.  Kids’ Chance was founded in 1988 in the state of Georgia and has since expanded to 28 states.

CCWC Chair Kevin Confetti first brought Kids’ Chance to the attention of the CCWC Board of Directors in 2013.  Ever since, CCWC has committed financial support and a platform for sharing the organization’s message. Henderson has been a regular feature at CCWC’s annual conference, sharing stories about the numerous children of injured or deceased workers who have been enabled to pursue their academic and professional goals with the help of Kids’ Chance.