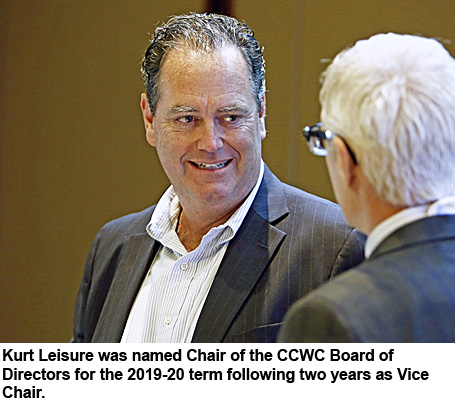 Kurt Leisure, Vice President of Risk Services/Asset Protection for The Cheesecake Factory, Inc., was seated as Chair of the California Coalition on Workers’ Compensation (CCWC) Board of Directors for the board’s April, 2019 meeting.

Leisure previously served a two-year term as Vice Chair. He succeeds Dan Bagan, West Region Risk Manager for UPS. Leisure's elevation to Chair, along with the appointment of additional officers for the 2019-20 term. took place during the board's December, 2018 meeting.

Leisure has been a risk management professional in the restaurant industry since 1987. He began his career in the insurance industry and built his initial career with Restaurant Enterprises Group, Inc. before joining The Cheesecake Factory in 1999. Throughout his career in risk management, he has effectively implemented aggressive, innovative and measurable claims reduction and strategic insurance programs.

In addition to serving as Chair of the Board of Directors, Leisure will continue in his role as Conference Committee Chair, a position he has held since 2015.

The December board meeting also saw the appointment of Jen Hamelin as Vice Chair, and Dan Nicholson as Treasurer. Hamelin is the Workers’ Compensation Claims Manager for the California State Association of Counties (CSAC) Excess Insurance Authority. Nicholson is the Director of Integrated Disability Management for Sutter Health.