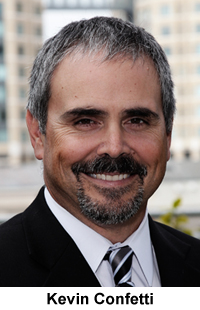 Kevin Confetti, Director of Workers' Compensation and Employment Practices for the University of California (UC), was appointed Chair of the California Coalition on Workers’ Compensation (CCWC) Board of Directors during the Board’s December, 2014 meeting. Confetti’s two-year term as Chair began January 1.

CCWC is the leading voice in pursuit of a just and impartial workers’ compensation system – for employers, for employees and for California. Founded in 1985, CCWC lists more than 250 member organizations, including businesses of all sizes, public and private, representing diverse industries from across the state; trade associations and non-profit organizations; suppliers that serve the workers’ compensation industry; and other interested supporters.

“CCWC has been instrumental in the historic passage of key cost-saving legislation, and is continually anticipating future challenges and formulating proactive solutions,” said Confetti. “We obviously still have many serious challenges facing our system and it’s going to take the collective efforts of all interested parties to overcome those challenges. We must be willing to work together to set forth a new path towards creating not only greater efficiency, but effectiveness, while further ensuring the health and safety of workers.”

Kevin joined UC in 2006, but has worked with the university since 2001, when he was the Program Manager for the university’s then TPA, Octagon Risk Services. He has a degree in Rhetoric & Communications from the University of California, Davis and is a certified Self-Insurance Administrator.