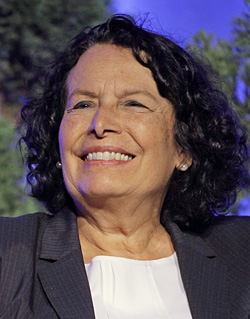 Since 2011, Christine Baker has served as the Director of the Department of Industrial Relations, the first woman ever to hold that position.

Renowned for innovative targeting in fighting fraud and the underground economy, Christine served from 1984 to 1989 as Chief of the Division of Labor Statistics and Research.  From 1990 to 1994, she was the Deputy Director of the Division of Workers’ Compensation.

When the California Commission on Health and Safety and Workers' Compensation was formed in 1994, Christine was its first Executive Officer.  She held that position for 17 years, helping to expand the commission’s role to include oversight of the health, safety and workers' compensation systems in California, and recommending administrative and legislative changes for improvement.

In April 2011, Christine was named acting director of DIR and was appointed director by Gov. Brown in December of that year. The Senate Rules Committee voted unanimously to confirm her appointment in May 2012.

She has been the recipient of numerous awards, including the 2008 Small Business Heroes honor presented by Small Business California, and the 2012 Human Rights Award from the League of United Latin American Citizens.