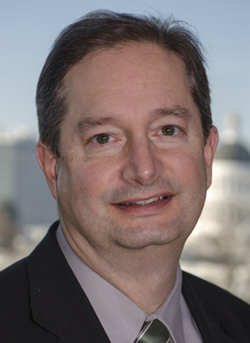 Dan Bagan’s retirement in 2019 culminated 36 years of dedicated service. Prior to retirement, he was the West Region Director of Risk Management for UPS, where he was responsible for managing the workers’ compensation claims in 15 western states, including California, over a span of 16 years.

He previously served as Director of Finance for UPS in Oklahoma from 1993 to 1996, Director of Finance in Washington from 1997 to 1999 and Northwest Region Director from 2000 to 2003. Dan started his career with UPS in 1983 as a package car driver in Denver, Colorado.

Dan was the Chair of the CCWC Board of Directors from 2016 through 2018, and had served on the board from 2004 until his retirement. He was also a longtime member of CCWC’s Conference Committee. During his tenure on the board, Dan provided leadership and expertise for two major reform bills in California: Senate Bill 899 in 2004, and Senate Bill 863 in 2012. Both bills succeeded at increasing benefits while at the same time reducing costs.

In addition to his service to the workers’ compensation industry, Dan is a member of the United Way’s Alexis de Tocqueville Society, which recognizes local philanthropic leaders and volunteer champions in the United States, France and Romania who have devoted time, talent, and funds to create long-lasting changes by tackling our communities’ most serious issues.