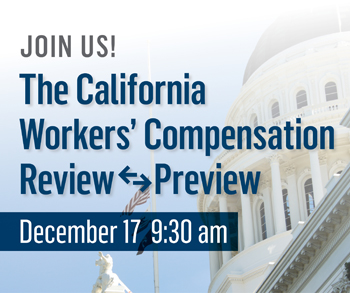 In this webinar presentation, legislative advocates for the CalChamber, California Coalition on Workers’ Compensation, and Workers’ Compensation Action Network review the major policy and political developments of 2014.  They also discuss how the November elections secured an unprecedented fourth term for Governor Jerry Brown, who has established a solid track record working for positive reforms of California’s high-cost workers’ compensation system.

The questions of how Governor Brown will look to shape the system in his second term and what positive improvements or reform rollbacks might lawmakers send his way during the next two-year legislative session are addressed, as well as the major issues for the workers’ compensation industry in 2015 are highlighted.

Download the presentation file used during the program (PDF format).